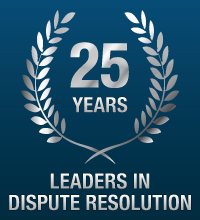 As MDRS celebrates 25 years of providing Dispute Resolution, we reflect on no less than a quarter of a century in our field — a field which has thrived beyond all expectations: no longer a mere alternative to the courts, but widely recognized as a more direct route to positive outcomes for all kinds of disputes.

It can be argued that in the past 25 years, no area of legal practice has grown to have a wider impact on the practice of law than the cumulative forms of Dispute Resolution. Over 97% of all cases presented now reach settlement without trial, such that Dispute Resolution has moved into its rightful position — and away from being referred to as the ‘alternative’ resource. With fewer constraints than a courtroom, proven convenience and cost savings, and happier clients in the end, ‘DR’ continues to expand with new tools and techniques, and an ever-widening pool of practitioners.

One need only look back to our individual and collective experiences of bringing the practice into the mainstream, to see how much the reception of DR has changed, even as the basic principles have stayed relevant and enduring. We recently dug out a clipping of an article featuring our founder Brian R. Jerome, an early adopter of what was, in those early days, an oft-criticized method of resolving conflicts.

Reference to “the costly and painfully slow court process” seem familiar and timely, but it’s a quote from The Beverly Times article, dated August 8th 1995, when DR was still a revelation for many accustomed to seeing litigation as the only option.

Timeliness and civility? Also present in the enthusiastic testimony of a client who worked with Brian in the early days:

“One session with him and we were completely back on track…It was very civilized, which was a nice way of getting all the feelings and thoughts out. I felt it was very much like having a lawyer and a psychiatrist at the same time.”

And yet, in 1995, the State Supreme Judicial Court had only recently set up a committee to phase in dispute resolution.

As the old saying goes, “In matters of style, swim with the current; in matters of principle, stand firm as a rock.” The hundreds upon hundreds of DR practitioners in Massachusetts, and the continuing increase of DR use in so many areas of the law, demonstrate how comprehensively Dispute Resolution has been accepted as the right option for resolving disputes, after so many years of being the “alternative.”

Of course with this progressive expansion and growth come increased responsibility. Serving this year as the Chair of the Massachusetts Bar Association’s DR Committee has given our founder Brian Jerome an opportunity to bring even more to the field he has dedicated his career to. It’s a pleasure to be able to announce that the Dispute Resolution Committee is moving forward with a new voice and refreshed objectives. We anticipate sharing with you, our clients and friends, many new and exciting opportunities in connection with this dedicated group in the coming months, not to mention many more months and years of exciting developments in our field – not only for MDRS, but for great numbers of our esteemed colleagues who practice Dispute Resolution and continue to advocate for peaceful, efficient, and cost-effective resolutions of conflict.

We at MDRS want to acknowledge that this milestone would not have been possible were it not for you, our treasured clients and friends. We thank you, appreciate you, and look forward to continuing our work with you in the future.