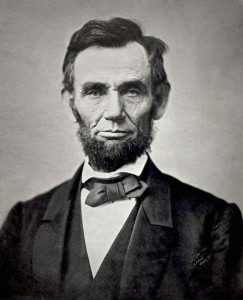 Our nation continues to be fascinated by Abraham Lincoln’s “Gettysburg Address,” delivered 150 years ago. Lincoln’s most famous speech became known as the “words that remade America.”

The address of only 272 words overshadowed Edward Everett’s two-hour oration and stunned the crowd of nearly 20,000 by transforming the ugliness of the war into a call for America to become a single people dedicated to one proposition: equality.

We revere Lincoln and are captivated by his legacy because he confronted a greater crisis than any other president. Lincoln became the leader of a divided nation, and his strong sense of moral duty equipped him to abolish the greatest injustice of our past: slavery.

We continue to be fascinated with the man who is arguably this nation’s greatest president, made plain from at least two facts.

First, more than 16,000 books have been written about Lincoln, more books than about any other figure in world history, with the exception of Jesus Christ.

Second, Steven Spielberg’s iconic movie “Lincoln” garnered a dozen Academy Award nominations and won two Oscars, including for Best Actor. We appreciate and admire Lincoln for his grit, moral authority, and ability to transcend petty politics through pure character and strength of will.

While it is Lincoln’s career as a great leader that continues to fascinate, much less is known about his quite extensive legal career, a period that dwarfed his time as president. From that earlier career, he developed his skills at compromise and an ability to forge alliances between folks of vastly competing interests, talents, agendas and egos.

Witness, for example, the eventual brilliance of those attributes that later radiated through Doris Kearns Goodwin’s “A Team of Rivals” (a book that incidentally consumed a decade to research and write).

Four significant points emerge from looking at Lincoln’s legal career. The first is that Lincoln, 150 years before his time, used and supported alternative dispute resolution.

Second, as a lawyer, Lincoln encouraged the peaceful resolution of disputes by not charging his clients for cases that settled on the courthouse steps.

Third, Lincoln so fundamentally believed in non-adversarial settlement that he wrote a speech for a bar association that actually discouraged litigation.

Finally, Lincoln’s sense of moral duty, evidenced by not only his significant acts as president, but also in his commitment to resolve disputes through non-adversarial means as a lawyer, transcends time.

Obviously, Lincoln never heard of the acronym “ADR,” as the term came into wide usage by American lawyers well over a century after his death. Yet, the practice of civil litigators to resort to alternative dispute resolution by mediation or arbitration was well established among the American bar before the Civil War.

In fact, Lincoln’s law practice appears to have embraced a non-adversarial strategy with his long, open arms.

Guy C. Fraker’s fine, detailed study of Lincoln’s legal career in “Lincoln’s Ladder to the Presidency: The Eighth Judicial Circuit” reveals that Lincoln, a highly respected trial lawyer, actively assumed the role of peacemaker, mediator and settlor of lawsuits as the vagaries of his caseload demanded.

Between 1836 (when Lincoln began to practice law) and 1860 (when Lincoln ceased his practice to assume the presidency), he was involved in more than 5,000 legal matters in the state and federal courts of Illinois. Nearly half of those cases involved suits for debt, while the remainder largely dealt with slander, title to land, minor tort claims and, most lucratively, railroad litigation.

About 33 percent of Lincoln’s cases were dismissed, most of them because they settled. Thus, Lincoln settled more than 1,600 cases in the course of his career and plainly championed compromise as an alternative to trial.

The Illinois of Lincoln’s day was a rough frontier; Springfield was a small community. In such a setting, Lincoln understood both the social and economic costs of a lawsuit as well as the turmoil and unrest it caused.

Remember, too, Lincoln’s own hardscrabble existence as a farmer, Mississippi River flat-boatman and manager of a general store. Those diverse experiences gave him insight into human nature.

Lincoln’s skill at reaching and preference for settlement was perhaps best displayed in slander lawsuits. In his brilliant study of Lincoln’s law practice, Mark Steiner observes that Lincoln often acted as a mediator in those emotionally charged cases.

In a frontier society, men sued for slander when accused of theft because such a charge could fatally damage a man’s reputation; women sued because of errant allegations involving their sexual reputation. In a long-past era, such allegations dramatically affected a woman’s standing in the community; indeed, it likely affected whom she could marry and her future economic well-being.

Thus, trials for slander were not so much to obtain a liability verdict against the defendant and a jury award, but rather to force the slanderer to publicly retract the allegation.

In 92 cases, representing both plaintiffs and defendants, it was not unusual for Lincoln and his partners to resolve the case by a compromise: The court would find the defendant guilty and issue a large award, but would remit the verdict once the defendant provided a public retraction.

Similarly, in commercial disputes, Lincoln has been praised for his frequent discouragement of doubtful litigation and his instinct for peacemaking.

In an 1850 case in which Lincoln represented Abram Bale in a dispute for $1,000 worth of wheat, Lincoln wrote the following to his client: “I sincerely hope you will settle it. I think you can if you will, for I have always found [the plaintiff] a fair man in his dealings.”

As to his legal fees, Lincoln said, “I will charge nothing for what I have done, and thank you to boot.” He advised his client that “by settling, [he] will most likely get [his] money sooner and with much less trouble and expense.”

The letter confirms Lincoln’s awareness of the enduring advantages of ADR — speed, economy and stress avoidance — that remain unchanged to this day. Although commercial disputes offered less latitude to be a peacemaker, Lincoln clearly had taken to heart the maxim in Noah Webster’s American Spelling Book: “Somebody is always the worse for lawsuits, and of course society is less happy.”

The largest part of Lincoln’s law practice was debt litigation. Money was scarce in a rough-hew frontier. About 700 of the 2,100 cases Lincoln handled in debt collection settled. Lincoln’s typical compromise was to accept partial payment with a year’s forbearance to pay the remainder.

That was an exceedingly difficult resolution as the prevailing system greatly disfavored persons who did not fully pay their debts. Lincoln’s personality and reputation likely contributed to most of those settlements.

Abraham Lincoln may not have known the term “ADR,” but he certainly embodied its practice. He recognized the advantages of a negotiated settlement and would even encourage his clients to avoid litigation by surrendering his own legal fee.

That sense of moral duty, not only as a president but also as a lawyer, to do what is best for his clients and for society, is what we enduringly admire. By promoting compromise, avoiding the uncertainty and expense of full-blown litigation, as well as inspiring and influencing his community’s social expectations, Lincoln’s alternative methods for peaceful settlement anticipated today’s use of ADR.

Associate Justice Dennis J. Curran, Massachusetts Superior Court is a member of the Board of Advisors of The Lincoln Forum. He has chaired the Superior Court’s Committee on Alternative Dispute Resolution and has also served on the Massachusetts Trial Court’s Standing Committee on Uniform Dispute Resolution, chaired by District Court Judge Mark D. Mason. Emma Kingdon is enrolled in a joint-degree program at Boston College Law School and its Lynch Graduate School of Education.

The authors wish to thank Katherine McCann, Jared N. Ballin, James L. Polianites, Vincent N. DePalo and Louisa E. Gibbs for their contributions to this article. They also wish to acknowledge retired Superior Court Judge John C. Cratsley, a leading light in the use of ADR for more than two generations in Massachusetts’ trial courts.